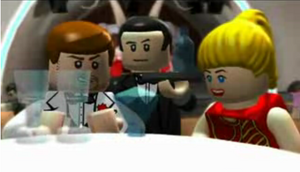 In Lego Indiana Jones: The Original Adventures, Wu Han appears very briefly in the opening cinema of Shanghai Showdown, the first level of Temple of Doom. Unlike the movie, Wu Han is killed by Lao Che's poison.

He also serves as a playable character in free play mode and has a Machine gun as his weapon. He can be bought for 20,000 studs after Shanghai Showdown is completed.

Wu Han has short black hair like Lao Che does.

Community content is available under CC-BY-SA unless otherwise noted.